The silly season is again upon us.

It’s the “Dawn of the Planet of the Apes.”

A New York appeals court next week will consider whether chimps should have the same rights as human beings.

The extraordinary proceeding is the result of a lengthy battle by animal-rights activists who argue that animals with human qualities — including chimps — are entitled to human protections, including freedom from captivity.

Steven Wise, part of the Nonhuman Rights Project, which is leading the effort, will have to convince a panel of Albany appellate judges that a chimp name Tommy is a “legal person” to get him moved from a cage in an upstate farm to a sanctuary in Florida.

CDC - Do You Believe Them? 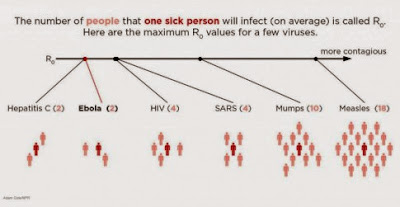 The CDC recently released the above chart that allegedly shows just how contagious Ebola really is.

The problem is, do you trust the CDC?

Every government agency has become politicized by the Obama administration. First there was no danger of Ebola coming to the US (right from Obama's mouth); now there's at least 100 people exposed to the disease and an entire family under armed guard for violating quarantine orders.

I haven't seen a single instance of anyone under armed quarantine because they were exposed to Hepatitis C, have you?
Posted by sig94 at 8:56 AM 5 comments:

Email ThisBlogThis!Share to TwitterShare to FacebookShare to Pinterest
Labels: Another Obama Foul Up, disease, Ebola

Maybe That's Why They're Homeless


Syracuse, N.Y. - Al Salinas, 59, a disabled veteran, and his wife were living in their car before they moved in May into VanKeuren Square, a new $11.5 million apartment project for homeless veterans at 2223 E. Genesee St.

"At first it was beautiful and wonderful," Salinas said. But before long some tenants began urinating and vomiting in the hallways, fighting, bringing prostitutes into the building and openly buying drugs on the property, he said.

Salinas said his wife is afraid to leave their apartment because she doesn't know who she will encounter in the hallway.

"Now she's saying, 'Maybe we were better off in the car,'" Salinas said.