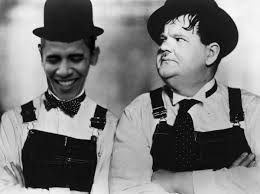 Well, there's another fine mess you've gotten us into!

President Obama's administration continues to stumble it's way into history.  We fumble in Egypt,  bumble in Libya and crumble everywhere else. The mess in Syria is ready to rumble, our foreign policy remains a jumble and our jobs situation is still in a tumble.

I was gonna write about how our nation has been humbled but enough of the rhyming. This isn't funny. There is a rationale behind it.

Think about it, no comedy writers could script this Presidency. It defies any Saturday Night skit imaginable. No one can touch Obama and Jarret for screwing the pooch: Laurel and Hardy, Abbot and Costello, Martin and Lewis, Cheech and Chong - well, maybe them.

I shudder to think what shape our nation will be in by 2014.

What did the German electorate think in May of 1945 when their nation was nothing but a pile of  stinking rubble?

*Gee, we elected that guy... what the hell were we thinking?

But Hitler lost the Presidency to Hindenburg in November of 1932 and through political maneuvering was actually appointed Chancellor in January, 1933. Even so, the Chancellery was basically an honorary position. The Nazi's won the ensuing March elections only after sweeping "anti-terrorist" measures were enacted after the February 27th Reichstag fire, giving Hitler the power he needed.  He simply arrested the opposition before the elections.

Talk about a false flag. Watch for it!

ALERTS TO THREATS
IN 2013 EUROPE
From JOHN CLEESE
The English are feeling the pinch in relation to recent events in Syria and have therefore raised their security level from "Miffed" to "Peeved." Soon, though, security levels may be raised yet again to "Irritated" or even "A Bit Cross." The English have not been "A Bit Cross" since the blitz in 1940 when tea supplies nearly ran out. Terrorists have been re-categorized from "Tiresome" to "A Bloody Nuisance." The last time the British issued a "Bloody Nuisance" warning level was in 1588, when threatened by the Spanish Armada.

The Scots have raised their threat level from "Pissed Off" to "Let's get the Bastards." They don't have any other levels. This is the reason they have been used on the front line of the British army for the last 300 years.

The French government announced yesterday that it has raised its terror alert level from "Run" to "Hide." The only two higher levels in France are "Collaborate" and "Surrender." The rise was precipitated by a recent fire that destroyed France 's white flag factory, effectively paralyzing the country's military capability.

The Germans have increased their alert state from "Disdainful Arrogance" to "Dress in Uniform and Sing Marching Songs." They also have two higher levels: "Invade a Neighbour" and "Lose."

Belgians, on the other hand, are all on holiday as usual; the only threat they are worried about is NATO pulling out of Brussels ..

The Spanish are all excited to see their new submarines ready to deploy. These beautifully designed subs have glass bottoms so the new Spanish navy can get a really good look at the old Spanish navy.

Australia, meanwhile, has raised its security level from "No worries" to "She'll be right, Mate." Two more escalation levels remain: "Crikey! I think we'll need to cancel the barbie this weekend!" and "The barbie is cancelled." So far no situation has ever warranted use of the last final escalation level.

And as a final thought - Greece is collapsing, the Iranians are getting aggressive, and Rome is in disarray. Welcome back to 430 BC.

Life is too short...

This has been around for years, not sure who actually wrote it (not Cleese), but it's still funny and perhaps even more relevant today...

50 Ways To Kill Your Lover

The son of now deceased North Korean President Poofy Hair is cleaning out old love letters he left in his dresser drawer. Rumor is he kept the ribbon.

Hyon Song-wol, a singer, rumoured to be a former lover of the North Korean leader, is said to have been arrested on Aug 17 with 11 others for violating laws against pornography.

The reports in South Korea's Chosun Ilbo newspaper indicate that Hyon, a singer with the Unhasu Orchestra, was among those arrested on August 17 for violating domestic laws on pornography.

All 12 were machine-gunned three days later, with other members of North Korea's most famous pop groups and their immediate families forced to watch. The onlookers were then sent to prison camps, victims of the regime's assumption of guilt by association, the reports stated.

“They were executed with machine guns while the key members of the Unhasu Orchestra, Wangjaesan Light Band and Moranbong Band as well as the families of the victims looked on,” said a Chinese source reported in the newspaper.


"I've got a problem", Kim Jong-un said to her
Just get into this van along with  my chauffeur
My wife's complaining, to shut her up  I must infer
There's over fifty ways to kill your lover

Hyon said it's not my fault your dick is small
And that's no reason to stand me up against a wall
But I've got my Bible and I guess that says it all
You're just determined to kill your lover
Over fifty ways to kill your lover
Just shoot her in the back, Jack
Aim it at her head, Fred
It's a bloody job, Bob
So listen to me
No need to make a fuss, Gus
Give the trigger a light touch
Don't listen to her plea, Lee
Blow her off her knees
Posted by sig94 at 11:00 PM 3 comments:

How To Answer A Woman 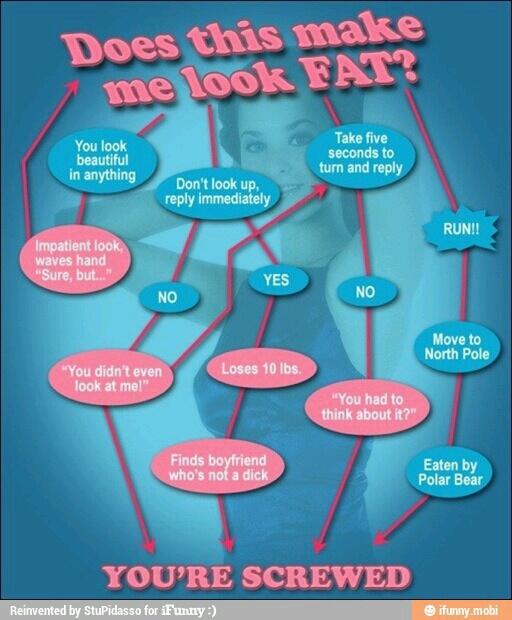 But I have an answer.

Take a breath as if you're about to reply, scream, clutch your chest and drop to the ground like a stone. 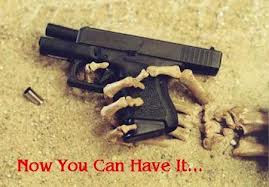 A Harvard Study titled "Would Banning Firearms Reduce Murder and Suicide?" looks at figures for "intentional deaths" throughout continental Europe and juxtaposes them with the U.S. to show that more gun control does not necessarily lead to lower death rates or violent crime.

Because the findings so clearly demonstrate that more gun laws may in fact increase death rates, the study says that "the mantra that more guns mean more deaths and that fewer guns, therefore, mean fewer deaths" is wrong.

Private ownership of handguns is banned in Mother Russia, yet the Russian firearm murder rate is almost four times greater than the US (30.6 per 100,000 as opposed to 7.8). It would be even lower if the feds would just regulate the borders as they should.
Posted by sig94 at 3:34 PM 2 comments:

It's Death! Eventually, Maybe, Sort Of...

They're more what you'd call ... guidelines.


The jury has recommended that the mass murderer of Fort Hood receive the death penalty.


Fort Hood, Texas (CNN) -- A military jury on Wednesday recommended the death penalty for convicted Fort Hood shooter Maj. Nidal Hasan, for the 2009 massacre on post that left 13 people dead and 32 others wounded.

The 13-member panel spent less than two hours deliberating privately, and the president -- or forewoman-- announced the finding in open court with a clear voice, that Hasan "be put to death."

The convicted killer said nothing as the decision was announced, and had appeared emotionless earlier in the morning when dramatic closing arguments in the sentencing phase were held without his participation.

I'm wondering if the jury's recommendation carries the same weight as Capt. Barbossa's pirate's code "guidelines" in Pirates of the Caribbean. In any event, this sonofabitch may outlive most of us during the appeal process.
Posted by sig94 at 7:45 PM 3 comments:

The Most Frightening Animal Ever! 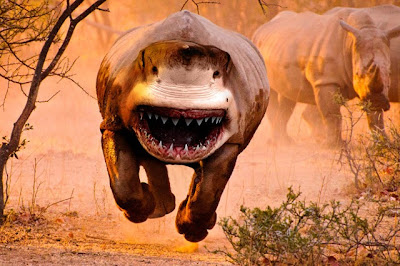 Scourge of the Serengeti: The Great White Rhinoshark.


MOSCOW: Western countries are behaving in the Islamic world like a "monkey with a grenade," a Russian deputy prime minister said on Tuesday, as the United States and its allies mull the use of force against Syria.

"The West behaves towards the Islamic world like a monkey with a grenade," Deputy Prime Minister Dmitry Rogozin, who is known for his sharp tongue, wrote on Twitter.

Despite the Deputy Prime Minister's learned and probably well-informed opinion, I don't think our policy is like that at all. 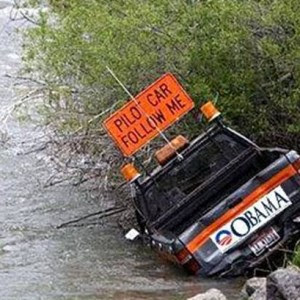 Email ThisBlogThis!Share to TwitterShare to FacebookShare to Pinterest
Labels: Mysteries

No One Wants To Work Anymore

The wife and I were at her uncle's 90th birthday yesterday and had a great time. He looks really well for 90 and, except for a few senior moments, he's pretty much all there. A nice man. Always liked him.

Now,I married into an Italian union family - all construction trades. Every blessed one of them. They're great people, kind people. I try not to talk politics with them though. Except with one of my wife's cousin's husbands. He's worse than I am. I truly believe Obama is gonna disappear this guy.

Anyway, about half way through the affair, one of my wife's cousins comes over to visit and sits next to me. This cousin could have been Luca Brazi in the Godfather. He's only about 5'9 but that's up, down, sideways and back and forth. It's also his neck. He's the biggest non six footer I've ever seen and he's gentle as a lamb, a real sweetheart of a guy who, if he wasn't disabled, could tear you apart. A good while back he got very sick from heavy metal fumes on a job - it almost killed him and it is still messing with him. Nasty, nasty stuff.

Any how, we're talking about family and our kids and yada yada the weather's perfect, how Nickie looks so great (half of them are called Nickie or Tony) and he talks about the union. They just put out two weeks of ads looking for new members to train. The job starts at $32/hour and they pay you to go to school for two days a week - again, $32 an hour is the starting pay. Star-ting Pay.

I'm dumbfounded. That's almost sixty grand a year for a high school diploma or GED. Good, steady work, but the work is hard. And you have to have some smarts.
No one signed up.

A generation ago guys would kill to get into this union, you had to know someone and then get a step ladder to climb over the bodies. In 1973, while I was waiting for the police exam results, someone offers me a shot at this - I'm gone like a scalded cat and living on easy street today. In Florida, not crappy NYS where I'm still a working stiff.

It's too easy to get government benefits, stay home, smoke weed and screw like rabbits 'cause your girlfriend is on welfare.


Depicted above is the reaction of some seniors listening to a muisic awards show.

Justin Bieber won and the seniors were not reluctant to voice their opinions.

The remark given at at 0:55 by a Vietnam Vet is a classic.