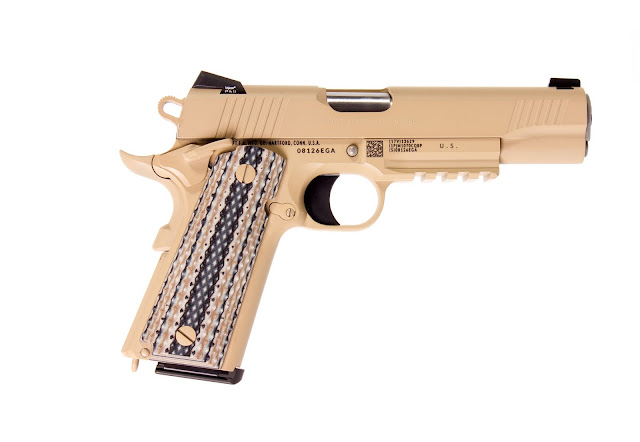 From the American Rifleman:


Like everything else in today’s complex military establishment, the new gun has a designation. It is the M45A1 Close Quarters Battle Pistol (CQBP). Several makers submitted their versions of the gun, which were built to specifications developed by the Marine Corps. It was Colt’s Mfg. Co. that won the right to build 4,036 pistols and spare parts. Interestingly, the contract is written to be extendable in both numbers and time. There may turn out to be as many as 12,000 M45 pistols. Firearms laws of the world
In Europe, Serbia, Bosnia and Switzerland rule the roost. In Asia, Pakistan has the most liberal gun laws; most Asian counties have very strict gun laws or allow no guns at all except for military and police.

Firearm ownership of the world
USA - we're #1!!!
Thanks to the 2nd Amendment, Americans have 113 guns per 100 population (more guns than people) followed by Serbia (70), Yemen (55) and Switzerland (46). Switzerland counts military weapons kept at home by soldiers so they are really closer to 25.

Murder by firearms for the world
We're #18. The top five are Honduras, Venezuela, Swaziland, Jamaica, and Guatemala.

Largest US Cities Responsible for Two Thirds of Gun Homicides
Of course most of these cities are run by liberal Democrats in predominantly democrat controlled states. According to the FBI, in 2014 there were 14,249 homicides. If the 2/3 estimate holds true, about 9,500 took place where Democrats reign supreme and where gun control is the tightest.
Posted by sig94 at 5:07 PM No comments:

At least in one fashion, the Jews are one of God's gifts to man. No other ethnic/religious group has received as many Nobel prizes as the Jews.


According to the Jewish Virtual Library, since the Nobel was first awarded in 1901 approximately 193 of the 855 honorees have been Jewish (22%). Jews make up less than 0.2% of the global population.

This year (2013) 6 of 12 laureates were Jewish. The 13th laureate, for the Nobel Peace Prize, was awarded to an organization and not an individual.

And the accolades continue to grow as new research is developed by the children of Abraham.
From the American Thinker:


One in six American men will develop prostate cancer. It is the most common cancer after skin cancer, and the second biggest cancer killer for men. Two Israeli scientists at the Weizmann Institute in Israel promise an almost miraculous cure, now in clinical trials at New York’s Sloan Kettering Cancer Center. It is the culmination of 20 years of basic research by plant scientist Avigdor Scherz and cancer researcher Yoram Saloman.


Several have speculated on why this is so.


Something about the cultural tradition of Jews is way, way more sympathetic to science and learning and intellectual pursuits than Islam.


Jews undoubtedly have genetic gifts, but much of their cultural flowering is from Judaism itself, a religion that fosters reading, thinking, and debating – in other words, individualism and freedom.


And now the most intellectually productive component of western society is being hounded out of Europe by hordes of barbarians. Can you guess where they are headed?

And the Europeans ain't putting up much of a fuss.

God is gathering His own.
You can't see the End Times from here; no one can.
But you can smell them.
Posted by sig94 at 10:31 PM 4 comments:

Not a real big fan of Bowie but he certainly was a cultural icon.

There Is Hope For Obama

Now medical science can grow a pair for you. This is a wonderful development for soldiers who have sustained grievous, life changing injuries and the GOP.


Doctors in America have created lab-grown testicles that could help soldiers who have sustained serious genital injuries on the battlefield to conceive children.

Hundreds of American soldiers wounded in Iraq alone sustained injuries that made it difficult, or impossible, for them to conceive children.

Now doctors involved in the Pentagon-backed research at the Wake Forest Institute for Regenerative Medicine in North Carolina have used stem cells taken from soldiers to reconstruct intact testicles capable of creating sperm.