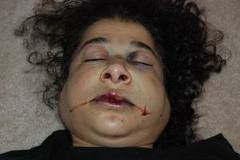 There is a rally for Fatima planned for June 10th in Tampa.
More here.
Posted by sig94 at 8:57 PM

I had a coffee table exactly like that. Treacherous.

Sounds remarkably similar to the case in which the victim accidetally fell on a knife, twenty seven times...

Wow, the incompetence of this ME's office stinks on ice! If there is such a thing as criminal incompetence, they need to be slapped hard with it.

And when they identify the Brave and Honorable mook that did this, they need to grease him up on the gurney so he slides smoothly into perdition.

BigVic - we had to get a permit for ours after it killed our neighbor's beagle.

BornAgain - while his hands were tied behind his back. Hmmm, the typical Italian suicide.

I worked with a crazy ME who was ultimately relieved of his duties when he showed up at homicide scenes wearing womans' clothing from prior murder victims. I gotta admit, he was a laugh and a half when I was photographing one of his autopsies. I think the whole scenario just got to him after a while and perhaps the same is true for the guy in Tampa. You can only carve up so much heartache before it screws you up.