Dirty Hippies - Who Loves Ya Baby? 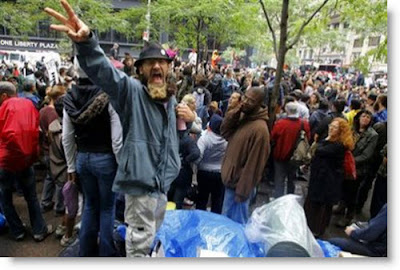 Those nasty unwashed commies hippies (don't want to give commies a bad name) who have infested New York City like a plague of fleas on a bluetick hound have friends in very high places. Plans to cleanse their "mother hive" in Zuccotti Park before the Black Death returns were canceled by the owners of the Park. Reports from within the squalid hive reveal that it is a sanitary disaster, a drug-infested nightmare. So why the change in plans?

Coming on the heels of the Solyndra debacle, the Obama administration has just approved a $168.9 million loan guarantee for the Granite Reliable wind farm project owned by Brookfield Asset Management (BAM). 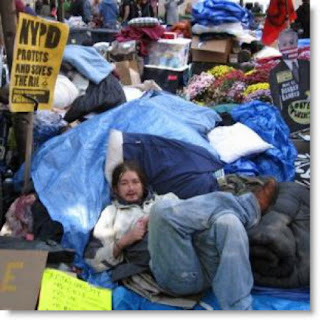 Among its many holdings BAM owns Brookfield Renewable Power, which owns the Granite Reliable and it also owns Brookfield Office Properties, whose holdings include the now famous Zuccotti Park.

The Department of Energy finalized the loan guarantee less than a week after Occupy Wall Street protesters took to Zuccotti Park, and with the Obama administration's Tuesday endorsement of the protests, rumors are starting to circulate that this could be the reason Brookfield is allowing protesters to remain on its property.

[...] Mayor Bloomberg's announcement Monday that protesters could remain as long as they liked, also raised a few eyebrows and it turns out he has a personal connection to Brookfield as well. The mayor's longtime domestic partner Diana Taylor is on the Board of Directors at Brookfield Properties along with John E. Zuccotti himself.

Zuccotti Park is the former Liberty Plaza Park, It is a privately owed "free space" named after John Zuccotti, the Chairman of Brookfield Office Properties. Zuccotti, an Italian American business man, was the First Deputy Mayor of NYC under Mayor Beame in 1975.
Posted by sig94 at 5:00 PM

Perhaps fatal sickness will take over the park. Pity.

Nice find. I knew there had to be a simple explanation. Barack Obama!

WoFat - then they'll blame Bush and the rich piggy capitalists for greedily hogging all the medical resources and not making them free for everyone.

These fools just cannot understand that nothing is free.

Mark - Obama may not be the AntiChrist, but he is certainly related to its little wrinkled brown hole...

Odie - we've all been following the money even before Obugger was elected. Hopefully all of America will do the same by 2012.

Perhaps fatal sickness will take over the park.

And they may not be spared from the verdict of the ObamaCare death panels because the dead can still vote in New York and Chicago.

Thanks for the info Sig.

These useful idiots are missing a key concept here. The same administration that is indulging their infantile, poo-flinging antics will have no compunction against going Tiananmen on them once they've served their use.
Too, I'm now convinced more than ever, that this isn't a political zeitgeist, its profound arrested emotional development.

LL - It's like Woodstock except it's quieter and no mud.

Kid - we can all appreciate the internet - there's very few secrets anymore.

Andy - good point. It will be a real shock for them when Daddy wearies of their crap and finally decides to spank.

Those fools won't admit that their biggest beef is with the president. Sounds like more HCC (Harvard Comm. College) grads to me.