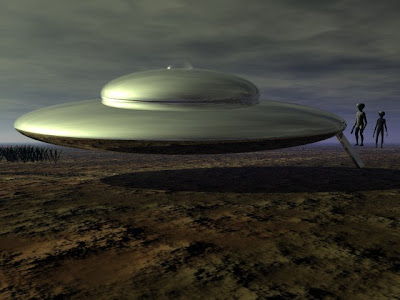 From our insane Cousins Across The Ocean, we learn that the search for alien life forms has been redirected towards this Earth; our own fragile orb swinging at the end of a gossamer thread betwixt the Sun and the vastness of interstellar vacuum.

Professor Paul Davies, a physicist at Arizona University will tell a meeting at the Royal Society that the best way of proving that extra-terrestrial life exists elsewhere in the universe is to use evidence from earth.

The meeting at the Royal Society, which will include representatives from Nasa, the European Space Agency and the UN Office for Outer space Affairs marks the 5th anniversary of the Search for Extra-Terrestrial Intelligence (SETI) programme. Lord Rees, President of the Royal Society will also lead one of the sessions.

Here at the Goomba News Network we asked ourselves, "Why do so many birds get all crazy after eating the seeds from that acre and a half of plants growing behind DC's double-wide?"
After receiving threats from DC's lawyer as well as police notifications of missing relatives, we then started asking if there are other questions we should be asking; such as why the search for extra-terrestrial intelligence would do such an about face. Why turn the scientific instruments of inquiry inward instead of outward? Why are there innies and outies?
With the global resources of GNN at our disposal it was only a matter of time before we had an answer. Not necessarily a good answer, mind you, but an answer.
As news of our search spread throughout our world-wide network of reliable, confidential informants we received this startling information from Phil.

Phil immediately returned to gnawing at the restraints that were keeping him on the gurney but this startling disclosure was enough to mobilize an army of GNN investigative reporters. Nothing could stop this juggernaut. We were bound and determined by a holy oath to see what teleprompters have to do with the search for alien life-forms ... as long as they had nothing to do with DC's backyard.

We discovered that the teleprompter was invented in the mid 1955 by Irving B. Kahn. Even though he was rumored to have died in 1994 at the age of 76, we were not about to let a mere technicality like death prevent us from giving you, our beloved readers, a chance to see the underpinnings of perhaps a secret society, a cabal of clandestine conspirators who would stop at nothing to keep their covert activities from prying eyes.
We hit pay dirt. We received a cellphone call from a Planet Fitness facility in Phoenix, Arizona. The confidential caller said he knew our target personally and attached this photo of Irving B. Kahn as he emerged from the weight room. 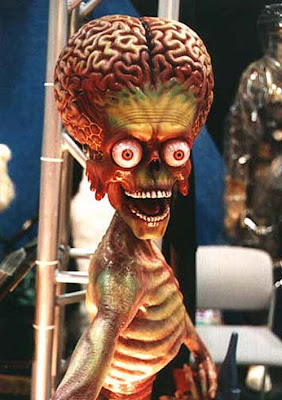 We grabbed the first flight available. We assiduously checked to make sure that the aircraft did not fly over DC's backyard. And by the time we got to Phoenix, Kahn was rising. We read the note he left hanging on his door. And again we read the words that said he was leaving, as he's left Phoenix so many times before.

So we interviewed his roommate who spilled the beans on this amazing story. Teleprompters are the product of an ancient alien mind control technology. They are more addictive than crack cocaine and the President of the United States has fallen victim to it's Siren-like attraction. After using them for only a few years, Obama made the fatal mistake of getting a teleprompter penile implant. From that point on he was under the control of aliens.

Indeed, Obama has made plans to expand the use of these devices throughout America. Like Johnny Appleseed, Obama leaves a trail of teleprompters wherever he goes. The children at the Graham Road Elementary School are in grave peril.

In just a few months, teleprompter manufacturers will deliver an astounding variety of Bluetooth personal teleprompters in the form of eyeglasses, hat visors, contact lenses and suppositories.

This is an invasion and GNN warned you first!

Email ThisBlogThis!Share to TwitterShare to FacebookShare to Pinterest
Labels: Teleprompters

DC presented me with a signed copy of his book "To Serve Man", Sig, and I'm a little frightened.

I do know that he had something to do with SETI, and I was planning a post on the matter.

The metal in his double-wide is non-ferrous, non-corrosive, non-conductive and weightless. And those mushrooms underneath?

Glad you mentioned it and not me.

By the way, SETI is engaged in "active SETI" or METI, Messages to ETI - flooding space with radio transmissions.

It's controversial, even with those who deny the Drake Doctrine. It's a bit like indigenous peoples in North America setting messages adrift in some way in the 17th century, saying "here we are, come on over".

Any money you contribute to our blog will be in addition to everyone's reasonable $1 monthly viewing fee.

Some of you have fallen behind in your pledges, Odie. I usually wouldn't mention it, but the Mercury needs a new water pump.

GNN has made an "arrangement" with the teleprompters.

Your monthly donations will enable GNN to adopt homeless teleprompters that otherwise will show up at your front doorstep.

And don't forget, the driver's door won't open I'm damn tired of having to get in the passenger side door and slide over when Goomba and Sig need to driven somwhere.

Rhod, thank the Good Lord above that the Merc's seat is clad in vinyl and so is yours. But we are running out of duct tape to keep you in place.

Nickie - didn't you ask "someone" to empty the ashtrays?

That had me LMAO!! Maybe the penile implant is the reason why Obama can't think logically, period? Yes, the safety of our nation is in perile and we must stop the teleprompter penile implantation revolution.

Sig... I'm just sayin' since I don't use the ashtray, the guy who chain smokes Pall Malls should be the one to empty the darn thing.

A teleprompter killed my brother.

I was always happy with the two terresticles I was born with. I've no more room for an extra one.

From that point on he was under the control of aliens.

That certainly explains a lot.

Whew ... I am glad Hogday wasn't the only one confused. Okay, a couple of observations:

1) Great job, Sig. I was reading that insanity (beautiful, insanity, that is) and I thought it was the work of the warped mind of Goomba. Then I got the bottom. Congratulations for hitting bottom;

2) But seriously ... can we all stipulate now that Obama is, indeed, a punchline. Would be really funny, but for the fact that he is our president until 2012;

3) What I grow behind my trailer is my own damn business. And if you walk through there, well, you do so at your own peril. If the magic Oz dust or booby-traps don't get you, the "security detail" and/or claymores will.