It's What Liberal Judges Do 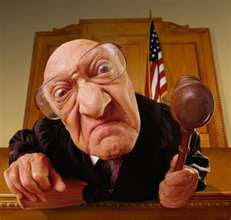 Liberal judges, the bane of western civilzation.
From the Boston Globe:

It looked like Carl Lemon would be going back to jail for the 20th time. Saddled with a 25-year record of shoplifting, drug dealing, and assorted other crimes, not to mention eight aliases, Lemon had made it easy for prosecutors. He even signed a confession saying that he had stolen a woman’s purse while she ate in a Back Bay restaurant. A second victim, whose bag he also snatched, had driven overnight from Canada to testify against him.

But, as the two victims watched in disbelief, the judge set Lemon free, saying that the career criminal, then 43, needed a detox program, not jail time. When the detective who arrested Lemon rolled his eyes and muttered that the decision was a disgrace, Judge Raymond G. Dougan Jr. had court officers lock him up for the morning instead. “I thought someone was going to jail that day; I just didn’t think it would be me,’’ recalled Detective Andrew Gambon.

This useless judge was appointed to the bench by none other than Michael Dukakis.
Posted by sig94 at 8:00 AM

And you expect nothing else from the great satan, Massachusetts?

Michael Dukakis? Now I understand. A state that could vote for Barney Fwank can't really expect any less, can they?

The 'judge' should be taken out to the street and be drawn and quartered period!

Vote Democrat. They love you.

Anon - they should call it the Black Mass State

The judge, no doubt, would get upset if his house were broken into and the police did not catch the bad guy in minutes, if not seconds.

Odie - it must be in the water. Look at what happened to Scott Brown. He's not as bad as the others but certainly no one to brag about.

Chris - if you read far enough into the story, the District Attorney has filed a complaint against this judge and it is currently being investigated. Unfortunately the head administrative judge is a good friend of this character and the whole affair most likely will go no where.

Nickie - vote Democrat early and often. Half the people in this country pay no federal taxes at all. Voting to get a piece of other people's money - it's like crack.

WoFat - Sometime around November of 1978 I grabbed a kid with a stolen car one evening. On the way back to booking he kept on bragging about how Judge Joseph Falco ("Let 'em go" Joe) was his scout pack leader or some nonsense like that and that he would help him out of this mess. The kid nearly crapped a brick when I told him whose car it was that he stolen. It was Judge Falco's. True story.

Who says we aren't every bit as lawful as Europe? Is this judge going to get some EU commendation?

Doom - if it was a mooslim that was being released...

How did the judge know he needed detox? Perhaps a fellow client. That's the only explanation I can think of because there's liberal, and then there's stupid...wait, sorry for the redundancy.

Detox program? How ludicrous!This judge is a moron. Maybe the judge needs to enter himself into a detox program? He had to be on something when he released this criminal and sent the detective to jail.

Seriously, on the radio in the morning in Cincinnati, they have officer Dierdre Ward who tells us about the vermin of the day that they are looking for. 999 times out of 1000 it is keyshawn or luwanda "WHO HAS BEEN ARESSTET 87 TIMES", most often for violent crimes.

Really? We're supposed to bust a gut doing THEIR JOB finding keyshawn when all they're gonna do is let the sucker loose again?

Dean - this judge obviously does not need much to go on. MA probably has pre-sentence reports from probation/parole on this character that report his substance abuse. This clown needed just a little hook to hang his hat on.

Kid - Back in the day when I held roll call, I used to give a "Pond Scum Release" report to the troops regarding parolees being sent home from prison.

I had a traffic court judge who heard a man I'd written a ticket to plead guilty; but the judge ignored the guilty plea and let him off with a warning. I spit on the floor and walked out; nothing was said so I guess I was lucky.

TFS - I am surprised that the judge let you get away with that. The only thing I can think of is that he was afraid to make an example of you because it would open his actions to more scrutiny. There probably was something going on that waren't eggsactly kosher.

Kid - a sad commentary. By time they finally end up doing some time, they feel so entitled to do whatever they please that their rights are infringed. We used to hear these idiots talk about justice as "just us" like we have to go out of our way to lock them up. They were, for the most part, lazy, incompetent low hanging fruit.

Thank God one of these judicial buffoons won't get the chance to turn KSM loose.