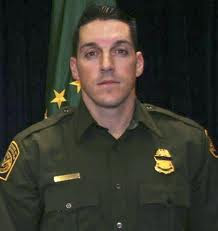 A while back I posted about US Border Patrol Agent Brian Terry who was murdered by illegals in a December, 2010, gunfight near Nogales. Two of the firearms recovered at the scene were found to have been part of an ATF "sting" where American gun dealers were encouraged to sell guns to people they knew were questionable.

Possibly thousands of guns were sent to Mexico in a massive operation known as "Gunrunner." When Border Agent Brian Terry was killed, he was armed, unbelievably enough, with bean bags. Now OpiniPundit has a link to a CBS story that cites email messages from a high ranking ATF official urging other ATF offices to participate in arming Mexican drug lords and illegals.

I don’t know what all the issues are but we are all adults, we are all professionals, and we have a (sic) exciting opportunity to use the biggest tool in our law enforcement tool box. If you don’t think this is fun you’re in the wrong line of work – period! This is the pinnacle of domestic U.S. law enforcement techniques. After this the tool bag is empty.

Maybe the Maricopa County Jail is hiring detention officers and you can get paid $30,000 (instead of $100,000) to serve lunch to inmates all day…We need to get over this bump in the road once and for all and get on with the mission at hand. This can be the most fun you have with ATF, the only one limiting the amount of fun we have is you!—e-mail from David J. Voth, group supervisor, Phoenix Group VII.

The CBS story is here. Apparently as far back as April, 2010, a gun shop owner who was participating in the Operation Gunrunner project voiced his concerns to the ATF that these guns may be used against Border Patrol AGents, many of whom were his friends.

Two months later, on June 17, 2010, the same gun shop owner again wrote ATF's Supervisor Voth again after he saw a Fox News report about firearms and the border. The gun shop owner called the report "disturbing" and stated "When you [Voth], [the Assistant U.S. Attorney], and I met on May 13th [2010], I shared my concerns with you guys that I wanted to make sure that none of the firearms that were sold per our conversation with you and various ATF agents could or would ever end up south of the border or in the hands of the bad guys... I want to help ATF with its investigation but not at the risk of agents' safety because I have some very close friends that are U.S. Border Patrol Agents in southern AZ."

This was six months before Border Patrol Agent Brian Terry was gunned down near the Arizona border. Two assault rifles that ATF had allegedly let "walk" were found at the scene.

One could easily, wrongly or not, draw the conclusion that the guns sold were intended to be used against border agents, given the proximity of sales to the border. Given this administration's handling of many foreign affairs, this actually is possible, more so in the light of this administration's belief in open borders.

When a government is so big that the left hand perpetrates the murder of the right hand, or even that this can be a concern, that government and it's people are surely... me... Doomed.

Doom - perhaps, but I am loathe to make that judgement. Incompetence at this level does not surprise me; that kind of malice directed towards fellow federal officers does.

Arizona and Texas should put up Huge Welcome Banners and directional markers down in Mexico and similar banners that funnel the illegals to pickup points. Put them on busses, and haul them to DC and drop them off.

Provide food, beverages, and weapons on the ride there.

Be a lot cheaper and safer. I'd sure drop craploads of them near where Janet the moron lives too.

Kid - I'd do more than that. I'd send a MArine battalion to the closest Mexican prisons, take every stinking reprobate in them and ship them to Georgetown where all these high muckymucks live. I'd give these animals pictures and home addresses of the wives and daughters of every politician in town and tell them to have a good time.

And I am serious about it. Bus those mothers.

Officers need not be involved to be directed to do exactly what was done. Much like two airplanes can be directed into a single flight path with neither pilot being complicit. I agree, even federal level law officers would not consciously or purposefully endanger local or other federal officers (barring legitimate reasons). The administration which handles them, the bureaucracy, that I have zero faith in.

How many bureaucrats hired by this admin, and others to be honest, truly despise America, capitalism, the military, police forces, and a truly free democratic republic? How many are simply corrupt? With college being what it is, I would guess... many. Perhaps even most.

What this administration did by allowing the weapons into Mexico has stained their hands with the blood of Agent Terry. The level of ignorance demonstrated by this Attorney General is off the chart. Doing a controlled delivery of narcotics is one thing where you can control the situation is one thing, but no way are you going to identify the head cartel members by this sort of operation. They should be ashamed of themselves and should resign, NOW.