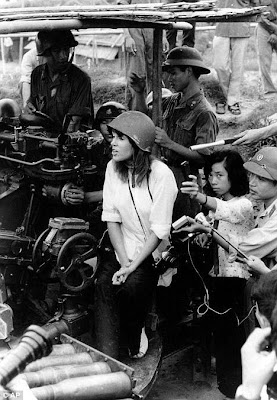 It's been 39 years years since Jane Fonda shocked the American public by straddling a Viet Cong anti-aircraft gun during the Vietnam War. She wrote in her 2005 autobiography that she'd been tricked into that gesture and has since apologised for her radical stance, but apparently that's not long enough for many QVC fans to forget the actress's anti-war activities.

QVC got so many complaints that they cancelled Fonda's appearance where she would have shilled her new book.

Please prepare yourselves for this next picture of Satan's Double Header. 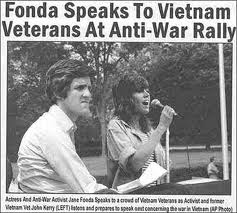 Payback is, literally, a bitch.

I never saw that photo before.
It's great to hear that people still remember and haven't given her a pass.

Once upon a time she would have been tried for treason on re-entering the country. She should have been even then. Protesting is one thing; fraternizing with the enemy is something completely different.

What goes around, comes around.

I stand with all the Vietnam Vets and condemn her actions to this day. You can add Sen. John Kerry to that list also.

Why she wasn't tried for treason in wartime is a question that makes my head spin. Our nation let these petulant creeps run amok and now they're making a total hash of things. As as for the bonus photo, I'm forever thankful that this goon was defeated in 2004.

I will NEVER forgive her!

It is a shame she was not charged with treason convicted then shot.

Goomba - and so is Jane.

WoFat - the first real argument between my wife and I occured when she bought the Jane Fonda workout album. I had a fit. Wouldn't let her keep it in the house.

CLady - one of my classmates accompanied Fonda to North Vietnam - David Ifshin. He later became Bill Clinton's campaign counsel during his 1992 election campaign. He died of cancer about 15 years ago. Hopefully he got it from a North Vietnamese chemical site.

Gorges - she should have been greeted with a firing squad. Any other country would have done the same - particularly the N. Vietnamese.

Mark - it hasn't come around fast enough and hard enough to suit me.

Michael - spoiled rich kid who never had to behave. Giving comfort and support to an enemy who was actively killing American soldiers or imprisoning them under the most harsh, inhuman conditions at the time. Unbelievable.

Andy - The more I think about it, the more I realize that the National Guard at Kent State had the right idea.

Fern - These memories do not stir kind thoughts in my mind. It is a sin to wish misfortune upon anyone as this is the province of God. But sometimes...

Odie - I remember and honor your service. Don't give this wretch another thought.

FuzzyD - first the shooting, the rest can follow at our leisure.

She got what was coming to her. Justice prevails. YEA!!

When your daddy is Henry, unfortunately you can pretty much get away with worse than murder. While I liked him, I think he did everyone a disfavor helping his daughter. And I doubt very much she ever understood the strings he had to pull and what he had to pay in many ways. The love of a father, I guess...

Even Janis Joplin, no friend of the nation really, suggested F went over the line... weakly suggesting J was a traitor. Ah, but doesn't she fit with Kerry? How in the world did such people gain power? Some Americans must truly hate America. Too many.

Teresa - She just has to raise her head a little bit above her liberal ramparts and the mobs still go into a frenzie. We'll never forget and she'd best keep that in mind.

Doom - years and years ago the privileged classes used to be patriotic and would serve their country out of a sense of duty and obligation with little expectation of reward. Like so much else in this nation of ours, things have changed. I blame the universities and the socialist scum that have taken over our institutions of higher propaganda.

So she couldn't appear on QVC? Boo-frigging-hoo, poor little spoiled thing. She got off lucky, her antics in Viet Nam didn't prevent her from living large and getting wealthy over the years.

Senator James Webb from VA., the author of "Fields of Fire" once said when asked if he'd like to meet her, “I wouldn’t go across the street to watch her slit her wrist.”

I always admired his restraint.

Subvet - I like "If she was on fire I wouldn't piss on her."

Ha-- say what you will about Fonda, her ridiculous Vietnam trip was stupid and counterproductive, but the Kerry/Fonda photo at the bottom is am known fake, created during the rush to indemnify a decorated veteran whose only "crime" was disagreeing with conservatives and war-mongers.