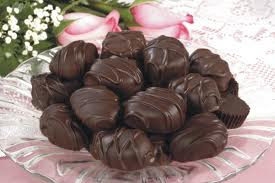 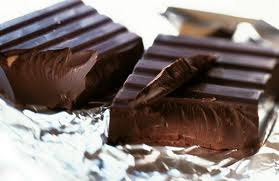 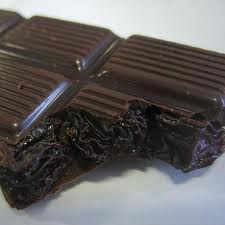 The next study will show that it's better for you than sex.
Posted by sig94 at 8:50 PM

Doh! You went and ruined it. I will have to find some other item to eat that is "unhealthy" or believed to be but isn't. Hmm, tuna? No, no... Beef! Ah, okay. The good fatty steak and fat roast type (chuck is my favored). And, not in small little tidy bits, I'm talking 1 1/2" to 3" thick slabs of ribeye and half a roast per sitting. Well, along with a quart or more of whole milk, and baked potatoes with double butter and sour cream, heavy on the salt, too. (seriously)

Don't ever go and tell me it's healthy though. And I'm still going to eat chocolate, to spite those yea-sayers.

Now just a minute there bucko ... better than sex? I refuse to read that study, but this one put me in a great mood ... pass the See's will you.

They can never make up their mind about chocolate. Next week it will be back to being unhealthy.

I'm always interested by articles about chocolate. Like why does the media perpetuate the myth that there is caffeine in chocolate? (look up theobromine!)
Anyway, I will now go eat a piece of dark chocolate I conveniently have on hand, in your honor.

Doom - pick yer poison. I personally like hot dogs and sausages washed down with raviolis and meat sauce. The sauce has to be cooked for at least 8 hours with pork, beef, sausages and meatballs.

Odie - I worked out today with a few Dove bars. I'm exhausted but strangely exhilarated.

Lynnae - have several, more than several. It's on me.

Sgt. D - God revealed to the Apostle Peter that nothing is unclean. Of course too much of anything will kill you too, even water. Something to do with the electolytes getting all messed up.

"In September 1999, a 19-year-old Air Force recruit collapsed during a 5.8-mile walk, with a body temperature of 108 degrees Fahrenheit. Doctors concluded he had died of both heat stroke and low blood sodium levels as a result of overhydration.

During January 2000, a 20-year-old trainee in the Army drank around 12 quarts of water during a 2- to 4-hour period while trying to produce a urine specimen for a drug test. She then experienced fecal incontinence, lost consciousness and became confused, then died from swelling in the brain and lungs as a result of low blood sodium.

In March 2001, a 19-year-old Marine died from drinking too much water after a 26-mile march, during which he carried a pack and gear weighing more than 90 pounds. Although he appeared fine during the beginning stages of the 8-hour walk, towards the end he began vomiting and appeared overly tired. He was then sent to the hospital, where he fell into a coma, developed brain swelling and died the next day."

"[...] drinking too much water is dangerous because the body cannot excrete that much fluid. Excess water then goes to the bowel, which pulls salt into it from the body, diluting the concentration of salt in the tissues.

Changing the concentration of salt, in turn, causes a shifting of fluids within the body, which can then induce a swelling in the brain. The swollen organ will then press against the bones of the skull, and become damaged."

I'm not prejudiced. I was just giving one example. My arm is so easy to twist regarding food, I have even scarfed down vegetarian fair. Still, I would much prefer what you suggest, especially since it my be on that "unhealthy" list!

Just didn't want to leave you all sore and such.