Because They're Better Than We Are 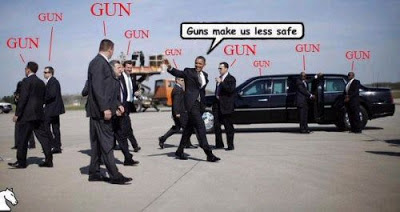 Obama's zany side-kick informs us that his boss wants to bypass Congress and impose draconian gun control measures. Instead of making us safer, he wants to make criminals out of a sizable proportion of law abiding Americans simply because they legally possess something that liberals don't want us to have.


[...]Biden also said the president might side-step Congress and seek to advance his agenda through executive order. Senior officials offered no details, but they acknowledge there's very little the president can do to advance gun control without the consent of Congress.

At the same time, Obama wants unrestricted access to heavily armed public servants for the rest of his natural life.

But aren't all pigs equal?

LL - To again quote Mr. Orwell - I guess some pigs are more equal than others?

The thing to think about, before becoming emperor, is... do my guards like me. Well... do they, punk?

I haven't seen Zero pull back from a proposal so fast, ever. I think, whatever the real case, he and his got a response they simply didn't believe. I noticed my computer, the day I wrote a post on this, being scanned, hard... Artifacts and mouse problems as well, as a bit more proof.

I think the tally was more like 120 million militantly against, a few thousand, unarmed, moderately for his proposal. I wonder how many "tar and feather", "treason", "revolt", and other words and phrases they counted before their tabulator melted?

I keep remembering how the Praetorian Guard was bribed to murder Emperor Elagabalus (222 AD).

His grandmother, Julia Maesa, supplied the denarii to the Guards so her other grandson could ascend to the throne.

Doom - Oh those pesky guards! The Praetorian Guard was bribed to murder Emperor Elagabalus in 222 AD.

His grandmother, Julia Maesa, supplied the denarii to the Guards so her other grandson could ascend to the throne.

This was neither the first nor the last time the Guard was involved in such intrigue before Constantine disbanded them.