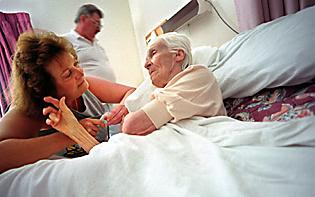 You might think that England's National Health Service was designed by Dr. Kevorkian except that Kevorkian killed his patients in a more humane manner than the torturous, lingering deaths imposed at Stafford Hospital. From the UK Telegraph:


Patients lying starving, soiled and in pain. Over-worked staff dogged by targets. Laura Donnelly tells how a culture of fear meant that ticking boxes trampled over the basic needs of the most vulnerable.

By the time Stafford hospital's failings were exposed by regulators up to 1,200 patients had died needlessly.

It was the scandal that shamed the NHS.

Hundreds of hospital patients died needlessly. In the wards, people lay starving, thirsty and in soiled bedclothes, buzzers droning hopelessly as their cries for help went ignored. Some received the wrong medication; some, none at all.

Over 139 days, the public inquiry into the Stafford hospital scandal has heard testimony from scores of witnesses about how an institution which was supposed to care for the most vulnerable instead became a place of danger.

The Brits knocked off 400 patients a year at just this one hospital. Someone ought to check to see what they were burning during the winter to heat the place.
Posted by sig94 at 8:28 PM

I shudder to think that we might be headed in the same direction...

It was only one hospital in England (that we know of) but is the root problem one that we will be facing here? What solutions will we find?

I have some doubt that NHS was shamed at all, save that they were caught. How many of the administrators and incompetent workers, again, went to prison? The real wait is for America to sign up. At that point, and it looks like it is here, the real genocide will start. Four hundred deaths in one hospital? I bet they can crank that up to a monthly score. Abortion might even seem small fry compared to this.

It makes me feel warm and 'progressive' to hear this story. Imagine, the Brits were able to eliminate these overhead costs to their healthcare system without even a single death panel.

We need to replicate this in America the way that NHS was replicated with ObamaCare.