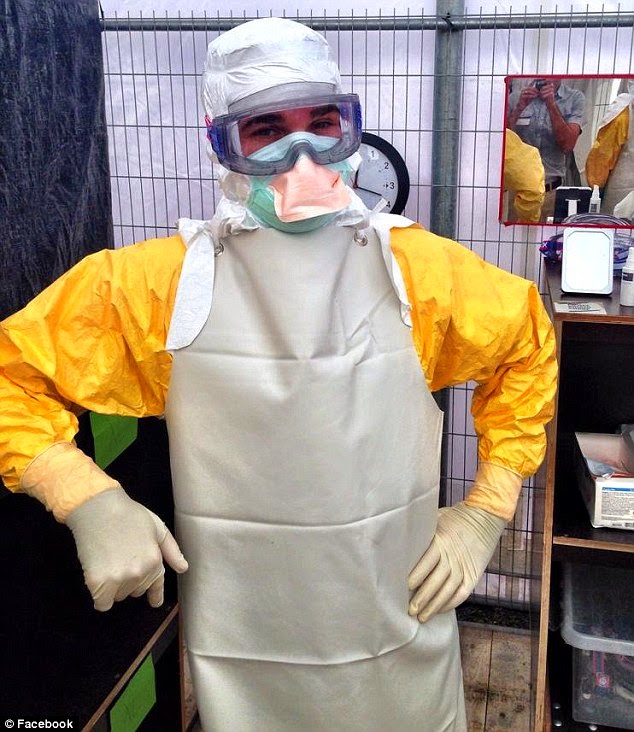 From across the pond we hear of a Doctors Without Borders physician who was so caring that he brought the deadly hemorrhagic virus back to The Big Apple Ebola.

Three people are now under quarantine and "disease detectives" are frantically seeking others who may have been infected whilst Doc Spencer spent a week wandering about NYC happily leaking ebola bugs and enjoying conjugal pleasures with his fiancee.


New York Ebola doctor's fiancee and TWO friends quarantined amid fears he gave them deadly virus: Potential victims in isolation - and there could be more after medic spent SEVEN days riding the subway, bowling and traveling in Uber taxis

Once again the barn door is shut, but not locked, after the horses are gone. When will they finally start to quarantine everyone who enters the US after spending time in an African shithole?

Because of what, and who, he is, I am beyond the pale in believing ebola is wanted, in the states, by this government. They need it to put things into play that will allow them to wrest power, and keep it what they have already stolen.

Has anyone talked to obama about this?

We have to consider the character of the assholes who have carried Ebola into the US:

Asshole #1: Tony Eric Duncan, a resident of the aforementioned shithole of Liberia who lied his way into the US for treatment. He is the ground zero scumbag, the Ebola Mary (get it? Typhoid Mary, Ebola Mary? Oh, never mind....).

Asshole #2: Dr. Craig Spencer. All you need to know is that this guy is a bleeding heart east coast liberal, who thinks he knows more than God, although he thinks folks who believe in God are all feeble minded. He joined Dr.s without Borders to help the downtrodden and make himself feel like a modern day Mother Theresa, a saint who can do no wrong. Then he comes back from the aforementioned shithole of Guinea and doesn't bother to quarrantine himself because he knows more than God, even though beief in God is only for lesser beings and the feeble minded losers that he is so superior to.....