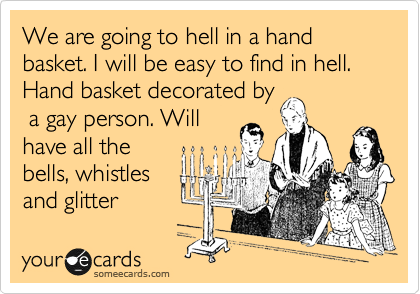 They may be going to hell in a hand basket, but at least they'll be nicely accessorized.


The Queer Student Union at California Polytechnic University recently orchestrated a three-day “shit-in” at which students preached “Gender Diversity” and encouraged students to use solely gender-neutral bathrooms on campus.

“Put yourself in the shoes of a trans*/gender non-conforming student and take the pledge to use only all gender bathrooms,” a post from the organization’s Facebook page read.

Students reportedly created a staged toilet in the middle of campus, which students signed and decorated with several banners, one of which read “We’ve got shit to deal with,” according to images acquired by Campus Reform.

The group’s Facebook page is also circulating a petition that states that the publicly-funded university “has identified only five bathrooms that are reasonably accessible, leaving non-cisgender students with a paltry amount of options when it comes to using the bathroom.” It calls “on the university to establish more accessible all gender bathrooms, in addition to adding ‘Gender Diversity’ signs to existing gendered bathrooms.”

I remember the Vietnam War was the hot topic for my generation. Looks like college kids are desperately seeking issues now. From "Die-ins" to "Shit-ins." Nice.
Posted by sig94 at 8:00 PM

Guess I never realized that defecation was a sexual thing. Butt then, I never put my ____ in one of those places.

The scary part is, that as university students, these may be the future leaders of the country! But then again, who gives a s---?