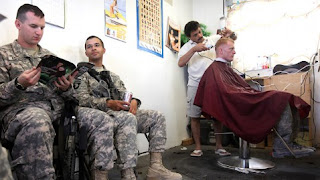 From the halls of Montezuma
To the sweep of well shaped brows.
Our fighting men don't act the same,
As then compared to now.

"Don't Ask, Don't Tell " is surely gone,
Will bidets replace latrines?
What other changes are in store;
Will our Armed Forces turn into Queens?

From the barbershops of Afghanistan:


It's a well-worn, time-tested observation that war changes men. Indeed, The Wall Street Journal reports, it's apparently transforming some soldiers in Shinwar, Afghanistan into vain creatures obsessed with their own eyebrows. A handful of men stationed at the U.S. Calvary base near the Pakistan border have taken to visiting the local barber for more than a crew-cut.

They're also getting their brows shaved or threaded into precisely sculpted arches. "They're straight guys — just a little metrosexual," says Spc. Rene Ruiz, who maintains a bushy, natural look but has brow-scaping comrades who also shave their legs and arms to better showcase their tattoos.

Seriously, I just don't get this new "combat chic" craze.


"I just wanted them to shape up my eyebrows," explains Private First Class Richard Guillemette, whose job is to call in artillery barrages from the front lines.

Pfc. Richard Guillemette, 20, of Lyman, Maine, had his eyebrows shaped by accident the first time, but decided he liked the thin, slightly arched look.

The private's first brow 'do was an accident. He had asked for a haircut and shave at the Afghan barber shop on the U.S. Cavalry base here in Shinwar. Only when it was too late did he realize the barber was tackling uncharted territory. Using a straight-edge razor, the barber sculpted his eyebrows into thin arches, tapering into points at the flanks.

That was a month ago. Pfc. Guillemette, a 20-year-old from Lyman, Maine, decided he liked the look, and he has had two touch-ups since then.

"They were getting a little bushy," he acknowledged in the chow hall recently.

It's not the military that I served in.

When they make the berets pink (queen berets), the destruction will be complete.

I knew things had changed back in '86 when I walked into the crews head (bathroom) to speak to one of my guys. Upon spying a hairdryer on the sink I asked, "Just who the hell owns that thing!"

Nope, not the same military I joined. From the sounds of the article it's pretty much the same all over now.

LL - the Army recruiter that signed up our daughter told us that they are limited to 30% of the population. The other 70% is too stupid, too immoral or too physically unfit.

Subvet - From what my service friends have told me, some branches of the service are worse than others. I heard the Air Force has really changed.

There will be a cleansing.

Good grief. I'm rolling over in my own grave and I'm not even dead yet.

Nickie - can't come soon enough. I know you really should't complain about people who voluntarily enlist and put themselves in danger. But in a combat zone you'd think there would be more important considerations to occupy yourself than screwing with your brows.

el chupa - I am still squirming over that video @ your sight.