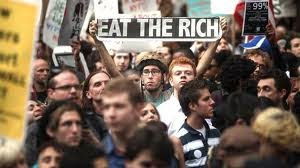 The Great Unwashed Is Our Name, Chaos and Confusion Is Our Game.
They are on the move again. Not sure of what they're doing and with no clear defined goals and objectives, Occupy Wall Streeters are nothing but dirty lemmings heading blindly over whatever cliff their leaders direct them. They are too ignorant to understand that they will not be allowed to exist in the society that they think they are advocating.

Lenin dubbed these type of people "useful idiots" and so they are. The gulag is what awaits them and anyone else who fails to realize how political forces are acting to manipulate opinion and intimidate opposition to hopey changey intiatives. This is the devil's work.

Our Constitution was modelled to accomodate a society that understood human nature and the frailities that beset it, especially the lust for power and control over others. Centuries of excess exhibited by Europe's royal families convinced the Founding Fathers that a system of checks and balances was needed to ensure freedom.

But these idiots understand nothing. Our Constitution may not be able to weather these fools without a freshing blood bath and I, for one, accept that freely and without reservation. This is nothing more than a feint, perhaps a rehearsal for wide spread civil disturbances that will paralyze our cities and "force" the government to impose draconian measures on the general population. Even now those measures may already be in place administratively.


An inchoate, seemingly rudderless administration coupled with a sinking economy and civil unrest is a recipe for an anarchical response. Weakness, vacillation, and erosion of institutional authority are an invitation to anarchical thuggery, which looks like welcome strength when compared to feebleness and arbitrariness.

It should be no surprise, then, that the Occupy Wall Street uprisings are happening. After all, such mob uprisings have historical precedent. Anarchy followed by tyranny occurs whenever weakness and a power vacuum, perceived or real, exists.

Examples from history abound, but two cases may be particularly pertinent.

The author cites examples of weak leadership evinced by Louis XVI that unleashed the terrors of the French Revolution and the failure of the Kerensky Provisional government to make reforms that could have removed any popular support for the Bolsheviks.


In present-day America, the stage has been set for civil unrest by an administration whose determined pursuit of change -- based on the radical ideological principles of the left and the concomitant application of wrongheaded "solutions" to a faltering economy -- has left the core institutions of our country weak and reeling.

The fact of the matter is that leftist goals, economic and governmental, are as inherently incompatible with the founding documents and institutions of our Republic as Maximilien Robespierre's goals for France were with the monarchy. The institutions of our country are simply not designed to foster and achieve the radical makeover the Obama administration has in mind. This is, of course, why the powers that be have worked overtime to achieve their leftist goals by supra-governmental means, including the radicalization of agencies like the EPA, entities neither answerable to nor established by the Constitution or subject to the electorate. This is also why Wall Street, the epitome of free-market capitalism, has been targeted by the left -- Wall Street's capitalist principles are also inherently incompatible with schemes bent on distribution of wealth.

I feel we are approaching a tipping point; just over half the country is receiving government benefits. Any disruption to those benefits could spark mass panic. First Amendment rights are nothing but a mask for a hostile leftist agenda embraced by the almost all media outlets. Our system of public education is a self-esteeming disaster and our culture of proud self-reliance is being replaced by a whining, self-aggrandizing culture of victimhood.

It is conceivable that a combination of anarchists, labor unions, and left-leaning media could unite and utilize the unrest and chaos to derail the 2012 elections themselves, giving the administration the opportunity to suspend elections because of a national emergency. The nightmare that would ensue is almost unimaginable, as the tactics already utilized by the administration could become even more fully utilized. The erosion of the rule of law and constitutional institutions would be assured.

Lest some cynically dismiss such a scenario as impossible in America -- "It Can't Happen Here" -- it is well to keep in mind that a similar scenario has transpired before in democracies such as the oft-mentioned Weimar Republic. To be clear, the phenomenon is not limited to monarchical eighteenth-century France and tsarist early twentieth-century Russia.

What would a moral, hard-working, upright German citizen have thought was possible on the night just before Germany's July 31, 1932 elections?
Posted by sig94 at 8:00 PM

So we now have a having a black president who somehow has managed to turn us against each other by playing the race card and made people think that working for a living and earning a good salary is greedy, And now he wants these entitlement sucking race card playing socialist to begrudge the people who actually work for they pay to be ashamed of what they have accomplished, and give it away to the unmotivated people who yell and scream with signs and with slogans, and chants.

Add to the mix the EPA rules kicking in the first part of next year. According to some estimates these will result in a loss of up to 25% of our electrical power. Following that will be nationwide rolling blackouts and skyrocketing electrical rates. Take a guess what that would mean for the economy.

So with the present dress rehearsal being acted out on Wall St. and other venues, we'll see an added surge of discontented citizens clamoring for a savior. You've very adaquately covered the rest of the story.

Exercise your 2nd Amendment rights now, while you still can.

History has a way of telling us what could be in the works for tomorrow---probably now.
And what sometimes slips through the winners tell of things, can be seen in times to come.
What we can hear from quite a few, on the radio and TV spots of the interview, are some sound rationed look at things in a grownup world. They have been compromised and told to march in the wrong direction.
Maybe if some who have the gift of gab, tell these young that what they have in mind is being played into by our adversaries; taking advantage of their lack of info about the Founding Documents.
That's what the Book-Wizard of Ozz,
was about---No Place Like Home. Come back home. Communism/Marx/socialism hit here in the late eighteen hundreds the book told who could listen to a good story with a message. That, it is always a person behind the curtain.

Oldie - they will no doubt endorse this plan yet they do not go after this President who has received the biggest donations from the greedy Wall Streeters and in turn given them hundreds of billions in TARP funding. They should be sh*tting on the WH front lawn instead of NYPD cars.

SgtD - it's like the whole world has been turned upside down. What was black is white, what was good is now bad, by the way pay more taxes so the lazy SOB's can live as well as you do without working.

Nickie - that's the rub, they are useful to merchants of evil. Satan's drooling, fawning minions.

Subvet - let's see if the Repubs can walkthis back before then. It will be a disaster.

TSWS - That would be Soros and others like him. McCarthy was right.