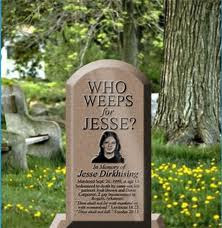 Jesse Dirkhising
Both murderers were sentenced to life in prison without parole for Jesse's death.
Posted by sig94 at 8:30 PM

WoFat - the hypocrisy of our politicians and media never ceases to appall me.

This is a broken country. All ya gotta know.

Man, wait 'til Jesse Jackson hears about this injustice!!!

I still remember this story and am still chilled by it. Chilled by the dark hearts that could do this to a child, and chilled by the stunned silence on the part of the left and their sycophantic chattering class. If ever there were two candidates for a short drop hanging, it would be these stains.

KId - and getting more brokener.

Andy - too bad it didn't happen in Texas, eh?