Hillary lost it when she finally realized that her role as Queen of America would not be realized. Her staff helped her stumble to her chariot and she raced home to her safe place behind the liquor cabinet. 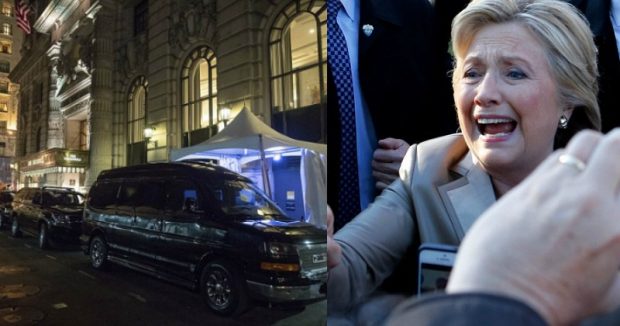 
Hillary no longer has to pretend to be someone she isn’t, and the second she realized her run was done, she removed her mask and showed the country who she really is, further validating that Americans made the right decision in dumping her on Tuesday night. Humiliated by her own demise, Hillary set the record as the first losing presidential candidate in history to not give a concession speech, but what she did instead made it worse.

The sore loser didn’t stick around for a second as she immediately left to go home to lick her wounds and sent her scandal-ridden campaign chairman John Podesta in her place to address the public for her. Instead of pulling her big girl pantsuit up, congratulating her opponent and thanking her campaign donors and supporters, she couldn’t face President-elect Donald Trump in person and conceded by phone in the comfort of her own safe space.