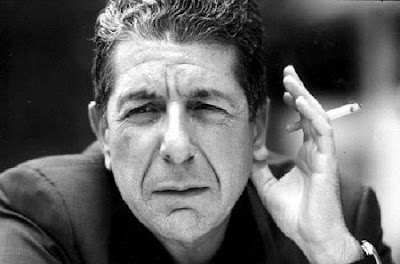 Leonard Cohen is dead.
I had no idea who Leonard Cohen was but since the Internets Were Weeping (2007, Columbia Records) over his death I decided to look this fellow up and see what all the fuss was about.

As a Canadian singer/song writer, Mr. Cohen sang and wrote songs. He did this for quite some time. He was 33 years old when his first album was released in 1967. His albums' names were quite literal, they had titles that actually descibed the songs therein. Titles like: Songs of Leonard Cohen, Songs From a Room, Songs of Love and Hate, Recent Songs, Songs Written While I was Shitting, Songs Written While Eating Broccoli and so on.

I still could not recall a single song that I knew was written or performed by Mr. Cohen. I thought this most peculiar as I frequently think of writing songs while relieving myself and almost always sing while doing #2. This latter action frequently disturbed my wife as the kids thought it was adorable and would flock to the bathroom door to listen to my croaking. I was never able to determine if it was my voice or the incredibly loud flatulence that attracted them. Fortunately only one of our daughters has incorporated my powerful but raucous genetic material within her DNA and we all fear that she will remain forever single. Although she can hear perfectly well, we still enrolled her in the Stanford School For the Hearing and Olfactory Impaired in hopes of her acquiring a mate. But again I digress. Forgive me.

Seeking to remedy this lack of knowledge regarding Mr. Cohen's repertoire, I employed the internets to expand my wisdom and to enable myself to enter discourse regarding his demise and thus comfort those who were suffering from his loss. I soon learned that, indeed, I was familiar with two of his works. I immediately recognized Suzanne as a song that I thought was first sung by Judy Collins when I was in high school and then re-released when performed by someone else, perhaps Bob Dillon? What did I know, I was under severe hormonal attack at that age and I had no inkling that Dusty Springfield was a lesbian.

The second song I kind of recognized was Halleljah, which I think gained fame when performed in the movie Shrek released in 2001. I think it had something to do with onions or maybe parfaits.

I continued my quest for Cohen content and soon realized that the more I listened to his music the more I wanted to open up a few of my veins with a spork. The music was depressing, stultifying. The monotone delivery alone was enough to make me confess to the Lindbergh baby kidnapping. This music was not for me.

There is no intention on my part to insult lovers of Mr. Cohen's music. Still, I must advise them to hide all plastic cutlery prior to embarking on a sentimental journey through his work.

I didn't know him either Sig. Thanks for doing the dirty work for me. Sounds like the libs would have loved him.

Kid - from what I have read he was popular in extremely that population. Hippies, beatniks, colleges, etc.