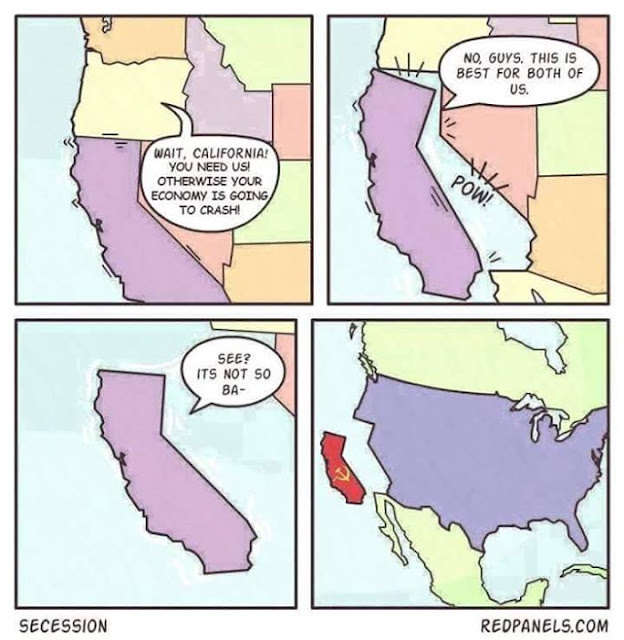 Looks like the insane libs in California are trying to finish what the San Andreas Fault hasn't been able to do yet.

If California secedes the financial consequences are:

If California secedes the political consequences are:

Good luck California and don't let the Sierra Madres hit you on the ass on your way out.

Yes I know that all the military bases would be subject to a lot of agreements, leases, contracts, stipulations, etc. It probably would be like negotiating with the Philippines.

Bases aren't a problem. We keep the water if they get itchy. Dam them. :)

You'd miss Pelosi's comic relief - saying "You have to pass the Bill before you can read what's in it."

Doom - not sure how much water they get from outside their state. If any, sell it to them.

LL - I dunno. There's enough clown circuses in the other 49. I'd love o get a chance to miss her.

I hope California does secede. Tell me. Wouldn't that mean that California's senators and congress people would have to leave? I mean, it wouldn't be a state, so....

And yes, who will bail them out of their bankruptcy, or accept any new California currency they come up with to do away with their debt?

It is time for the libtards and sane people to divorce based on irreconcilable differences. Thank God we don't have a pre-nup.

The libs can live in the frozen North and we will accept responsibility of the South. And don't call us - we'll call you.

Right, but I don't think the farming and ranching areas would go peaceably. To be honest, they could use almost all of the water. They don't because they fear if they don't 'sell' it, they would just have their water rights stolen outright. No, I... think they would end up with a massive water problem.