The next five weeks should be very interesting. I have no idea what the Chinese will do once Trump is President and you know they will test him severely. As far as Obama is concerned, the Chinese don't give a rat's ass what he will do. But for now, they will play games with the reset of the One China policy, oh, and here it comes. This is a continuation of clashes between the US and China since Trump took a congratulatory call from the President of Taiwan.


(CNN)A US oceanographic vessel Thursday had its underwater drone stolen by a Chinese warship literally right in front of the eyes of the American crew, a US defense official told CNN Friday.

In the latest encounter in international waters in the South China Sea region, the USNS Bowditch was sailing about 100 miles off the port at Subic Bay when the incident occurred, according to the official.

Bowditch had stopped in the water to pick up two underwater drones. At that point a Chinese naval ship that had been shadowing the Bowditch put a small boat into the water. That small boat came up alongside and the Chinese crew took one of the drones.

Subic Bay is about 60 miles west of Manila right on the coast. If you go 100 miles west of Subic Bay, you are still very, very close to the Philippines and no where near China. You have to admit it, the slanty eyed pricks haven't proved a thing going up against an unarmed research vessel. 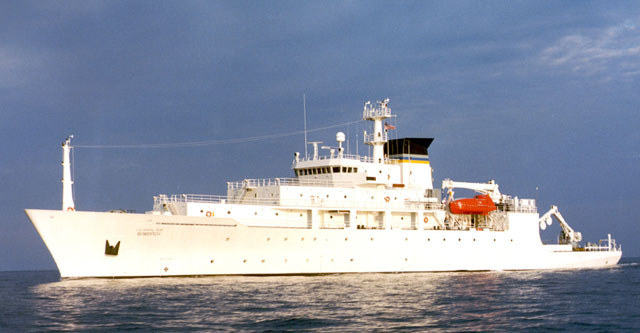 USNS Bowditch (T-AGS 62) is a Pathfinder class oceanographic survey ship. She is the third ship in the class. USNS Bowditch is a part of a 29 ship Special Mission Ship program and operates in the South China Sea. She is named after Nathaniel Bowditch. Bowditch was engaged in surveying at Tacloban shortly after typhoon Haiyan in advance of the Navy's Operation Damayan in an area known for its shifting hazards to navigation using its multi-beam contour mapping system.
Posted by sig94 at 4:30 PM

I recommend we nuke mecca over this.

I've read about this on a couple of internet sites; but nary a word on the MSM that I have noticed.

Will be interesting to see what happens after Mr. Trump is sworn in.

They took down one of our Navy surveillance jets and we did nothing. I expect the same thing here.

I don't believe I ever heard of that, sig94. It is frustrating to know stuff is happening to our military and none of the media gives a darn. >:/