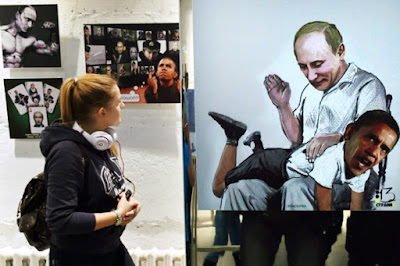 I just know there's gonna be another line drawn in the Syrian sand for Russia to ignore and a rubber duckie thrown in the water for China to play with. Like I stated in the prior post, the next five weeks will be interesting.

Obama's ass is going to be very sore when he leaves next month.

WASHINGTON — President Barack Obama is promising that the U.S. will retaliate against Russia for its suspected meddling in America’s election process, an accusation the Kremlin has vehemently denied.

Amid calls on both sides of the political aisle on Capitol Hill for a full-bore congressional investigation, including assertions President Vladimir Putin was personally involved, Obama said in an interview that anytime a foreign government tries to interfere in U.S. elections, the nation must take action — “and we will.”

Neither country is going to listen to Obama. Putin is preparing to kick some Arab ISIS ass with Trump and China ... who knows. Do we have the resources to back up our interests in the area? I don't think so.

Trump has his work cut out for him. Both Pakistan and the Philippines are moving towards China as economic and strategic partners. Also check out LL's blog here for more on the Pakistan development.

This should not come as a surprise. Obama's weak sister, ass bowing approach to diplomacy does not create good allies.  If a foreign nation is going to cooperate in protecting our interests, they want a partner strong enough to jack up anyone who comes against them. This does not mean war; just make an offer that they can't refuse and do it quietly. Roosevelt's Great White Fleet was a good example of this. A gesture of good  will and strength.

The US is viewed as weak. It will take a little time and competent, consistent diplomacy to change that as well as improvements in our military strength.

Thanks to Obama, we can't cover any of our interests, I don't believe.
I hope Mr. Trump gets the war machine turning in high gear to rebuild our forces.

And I hope we at least go back to the 'don't ask, don't tell' policy. And maybe get rid of some of the pansies.

Be safe and have a Blessed weekend.

LindaG - I believe that under Obama the same thing has happened to our military as under Clinton, many competent people have left in frustration. Many good officers left because they could not accept his leadership.

Hopefully Trump will address this swiftly and positively. From his reception at the Army Navy game last week I really expect this is going to happen. Our military is expecting it also.