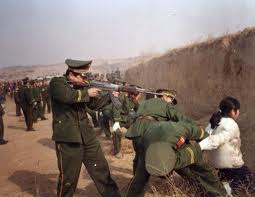 Ring Out The Old
China has the highest number of executions in the world. The exact number is a state secret, but Amnesty International estimates the number at 1,770 per year. Other estimates are much, much higher, from 6,000 to 8,000. Most Chinese executions involve a rifleshot to the back of the head in a public forum, say a park, where a crowd can witness the death. But the Chinese government is now providing a means for a more humane form of execution through mobile lethal injections - Death Vans. 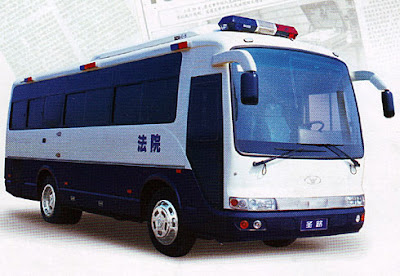 Execution chamber: in the back, with blacked-out windows; seats beside the stretcher for a court doctor and guards; sterilizer for injection equipment; wash basin

Observation area: in the middle, with a glass window separating it from execution area; can accommodate six people; official-in-charge oversees the execution through monitors connected to the prisoner and gives instruction via walkie-talkie.

Production to date: at least 40 vehicles, made by Jinguan and two other companies in Jiangsu and Shandong provinces

I have no idea what kind of mileage they get or if an RV version suitable for retirement parks (like those in Nevada casino resorts) is available. Did you notice the Chinese soldiers leaning to either side of the victim in order to avoid the brain splatter? Oh, the vans are simply a dream come true when you want to avoid costly dry cleaning bills!

But the nasty undercurrent here is that this method of execution makes it easier for the government to harvest the organs of the decedent. Indeed, it is reported that some executions are delayed until a request for organs is received.

UPDATE:
I wonder if the ObamaCare vans will play music?
Now available in disposable syringes and suppositories.
Coming soon to a neighborhood near you.

And here I was trying to argue with a customer of mine who was telling me how advanced and well the chinese have become and us americans could learn something from them....this , i dont want to learn . smh

So how long before these "vans of death" start taking physical undesirables for a final ride? I'm thinking of the aged, infirm, etc.

In Nazi Germany the goons would come for "Gramps" to take him somewhere he'd be better off. Next thing anyone knew, he was worm food.

Tell me history won't repeat itself, I'll tell you of my complete belief in what you say.

Then we can sit down and figure out who between us was the best liar.

Obamacare is drooling, they haven't progressed past simple "death panels"...

Please stop by TBAA today and help this worthy cause...

I'm glad to see things are more humane now. It kind of gives you that warm fuzzy feeling when shopping at WalMart.

Horrifying. Truly disgusting. Mind you we in Europe regard Americans the same way for still having the Death Penalty. Barbarism and primitive thinking is relative I guess.

The difference here in the U.S. is that we have trials and those accused are provided the presumption of innocence and an attorney.

Do not try to compare apples and oranges.

People who shop at walmart are pinko commie rat traitors.

KoNY - I'm afraid that we may have "health care consultants" who are already planning Chinese style enhancements to ObamaCare. Only they'll have it the size of a popsicle truck to save money.

I wonder if the Chinks will have music playing as the van rolls into the neoghborhood - like a Mr. Softee truck?

Subvet - I was thinking along the exact same lines. Apply for Social Security and they automatically give you an appointment date for a ride on the needle. What say you to Palin's little baby Trig? How long before Downs Syndrome kids are being lined up for their ride?

BornAgain - ObamaCare is dripping with venom.

BigVic - if I know the Chinese, they'll soon be offering a worm activated compost trailer add-on for the Vans O'Doom. You might as well get as much use out of grandma as possible when planting your bok choy.

Anon - Ditto Chris. Plus you have State appeals and Federal appeals before your date with the hangman draws high.

In China I imagine you only get your choice of needle size.

And if the van isn't available?
Perhaps you have the option of a rifle equipped with a recoil pad so your executioner doesn't get a sore shoulder.

Silver - Do you work for Target?

Lone - we laugh, we joke, we kid around... but this is deadly serious stuff.

I have the letter right here, it's on Congressional letterhead and it's signed right he.... Hey wait a minute! It's signed "Pelooser! Bwhahahacackelcackle" Bastids !

Innocents die due to the death penalty. How can an executioner live with their conscience knowing they have taken an innocent life? How can you support a system that kills innocent people. Barbarity. Utter barbarity!

This may come off wrong, but I am not sure I am against using condemned prisoner parts, in principle. Now, having said that, I could only condone that in a nation of laws. None are perfect, some are far superior. However, I do worry that using prisoner parts for medical use would lead to severe abuses, in practice. How to get the honey without harming the bee, I suppose.

As for China, they are not just on the highway to Hell, they are turning it into a eight-lane structure with upgrades planned, and international connections in the works. Without a belief or basis in fundamental rights or morality, anything goes. And, almost "anything" goes straight to Hell, only a narrow path leads elsewhere. On the other hand, it means there is a lot of saving potential there. For those who have the ears to hear and the eyes to see. *blink, blink*

Kid - But you can go like that! As the attendants admininister the happy-happy joy-joy juice, instead of viewing beautiful scenery and peaceful settings like Edgar G. enjoyed, you can view images of what your 401k could have been before the democrats got their filthy, stinking paws on it.

Doom - "As for China, they are not just on the highway to Hell, they are turning it into a eight-lane structure with upgrades planned, and international connections in the works."

Poetry my friend, sheer poetry. Are they planning rest stops too?

Sig, I told them to get their dirty filthy stinking Paws Off of Me !


@Anon, Hell dude/dudette, we can't be 100% sure about anyone we even lock up right, so why not just let them All go? We'd save a lot f money and people who couldn't defend themselves would be butchered on the streets night and day, but what the hell, if One Innocent Life is Saved, it's Worth It !!!!!

Kid - Anon has the typical emotional response and has no idea how many people are locked up for murder and how incredibly small the percentage is that are factually innocent.

The first picture in this piece is too chilling for words. I have to wonder what her actual crime was. Praying? selling cabbage from her garden?
These will be our overlords too if the crypto muslo-marxist at 1600 Pennsylvania has his way.

Andy - After readins about the gulag years ago I got the distinct impression that the political prisoners were much, much worse off than the actual criminals (who pretty much ran the prisons). They were subjected to unbelievable torture. Some were sent to mental institutions and subjected to experimentation. This was under the guise that if you were not happy in the workers' paradise you had to be crazy.