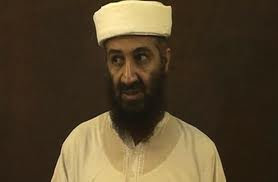 This is what the Navy Seal team looked like when they went in to get Bin Laden. A couple of things to notice: 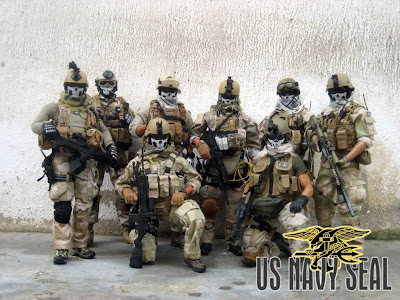 Let's be clear on this:
OBAMA did NOT kill Bin Laden. An American sailor, who Obama just a few weeks ago was debating on whether or not to PAY, did.

In fact, if you remember a little less than two years ago his administration actually charged and attempted to court-martial three Navy Seals from Seal Team Six. A terrorist suspect they captured complained they had punched him during the take down and bloodied his nose. Obama's administration further commented how brutal the Seals were. The left took their usual pound of flesh, calling them Nazi's and Baby Killers.

Now all of a sudden the very same brave men vilified by Obama and his cohorts are now heroes when they make his administration look good in the eyes of the public. Obama just happened to be the one in office when the CIA finally found the bastard and our sailors took him out.

Essentially, Obama only gave an answer, Yes or No, to Osama being taken out.

This is NOT an Obama victory, but an AMERICAN victory!!!

One can dream of a day when someone is stripped of his citizenship and perhaps gets to see the same thing Bin Laden saw. Terrorists, after all, are terrorists. Further, I am sure his 'living on $1 US a day' brother would gladly give him up. One can dream happy dreams.

And as usual, it took oblabber 8 months to make up his mind after the target was located.

They probably had to threaten him and say it would be suicide if he F* around any longer and osammy got nervous and moved. Because That Would get out eventually.

The American Fighting man... A breed of hero whom Mr. Sowerto is not worthy to even lace their footwear.

Doom - One can only imagine,

Kid - I think he was waiting for an opportune time when it would be to his greatest advantage. He did it at the nadir of his poll popularity and got the shortest bump in the history of Gallup.

Odie - never has a President owed so much to so few....

Andy - I'd let him lick the bottom of those boots. But first I get to choose where those boots do their walking. There's a cow pasture that I have in mind.

I'm going to bring up that picture in Photoshop and insert the pictures of my three children above the SEALs. The caption on top will read "These are my children", and on the bottom "These are the men who protect them". That will be my new desktop wall paper.

Derek - Now that's an idea! I got a picture of my daughter in combat dress with her platoon leader while on patrol. It's my computer's desktop.