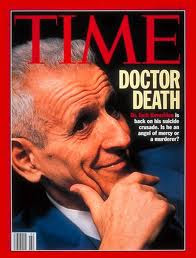 I wonder if he is gonna need to do a bit of 'splaining where he's going?
From the Washington Times:

Jack Kevorkian, the former point man for the right-to-die movement, died Friday at a Detroit-area hospital from natural causes. He was 83.

The Michigan pathologist, who was released from prison in 2007 after being convicted of second-degree murder, became a national figure after assisting in 130 suicides during the 1990s. For some patients who wanted to end their lives, he would hook them to a lethal-injection machine. He strapped others to a face mask that was connected to a carbon-monoxide canister. The patients then controlled when they killed themselves.

His actions sparked a national debate about physician-assisted suicide for patients who doctors believed had no hope to live. It raised questions about the reliability of a terminal diagnosis and the possibility of future breakthrough treatments.

Tough subject Sig.
A work mate's wife died a year ago from cancer. She spent 9 months or so in pure hell of operation after operation. Her body was completely consumed with it. The 1st thing they did was surgery to put her on a colostomy bag. From the 1st surgery on she was on regular Chemo and too weak to do anything for herself.

She may have been better off just getting pain pills. There wasn't any 11th hour medical reprieve coming for her. And from personal experience it seems most older people go this way.
Personally, I think I will refuse all the lab rat stuff if I get to that point but one never knows what they will do.

Just to be clear, not for me or anyone else to decide, ever, but it's a cruel scenario.

Kid - in some respects I agree. The improvements in medical treatment only seem to prolong the inevitable. I watched both my in-laws go and made the trips to the hospital with my wife as they weakened and worsened. My dad went quickly, so did my kid sister - both came as shocks.

My personal opinion is this, it ain't up to us when we enter this world and the same thing applies when we exit. Of course I haven't suffered what many do and I hope I receive from God the courage to accept whatever fate He has decided.

It is only up to God when and how we die. Yes, we can help alleviate the pain and suffering but it is not our decision to end our life or another's. Plus, many of his assisted suicides weren't even terminally ill.

"Thus, while the media continually described him as the “retired” doctor who helped “the terminally ill” to commit suicide, at least 70 percent of his assisted suicides were not dying, and five weren’t ill at all according to their autopsies."

This is why playing God is dangerous stuff.

Even without incorrect terminal diagnosis and future medical cures, the truth is suffering is a part of life. While I struggle with how much "medical intervention" to allow, and I suffer greatly from time to time, the only reason I resist some of the medical intervention is because it can block me from knowing that I am living (and maybe dying). I want to be conscious of my life. I need to be. Even the hard parts.

I just can't imagine, at this point, simply quitting. What is worse is helping people do that. I suspect he has now seen the truth. Then again, I think he has always known it but chose to ignore it. I am not sure if what he did was from pride, arrogance, or avarice. But I do imagine he knows, now, it was evil whole and plain and beyond a doubt.

Not all medical intervention has to be accepted. But suicide shouldn't be considered. Life, whether in the womb or in our skin, is not ours. We are borrowing it. How we manage it is another thing. For cancer, I would accept only pain mitigation myself, I think. I neither trust nor hold out hope from the medical field. We are merely pay checks for them, no matter personal sentiments. I suppose they do work to improve, but what they are really trying to do is undo death. I think I'll bet on God, not foolish men in white coats, in this competition.

Doom, to clarify, I would never consider suicide. I think suicide is one of the hard rules you never break.

I will stand long and send out for LSD if necessary.