There Must Always Be A Day Of Rememberance

Why do we bother with memorials and remembrances? Why should we care whether or not events peculiar to our culture are observed for all time by future generations? 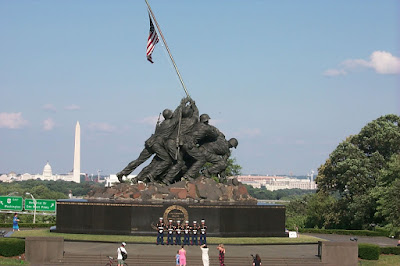 Unfortunately things have progressed to the point in America where perhaps we need to have discussion like this. Memorials have been observed for thousands of years. The earliest indications of human existence are recorded in some part due to man's need to remember (also to serve some rather colossal egos!), to hold near and dear the memory of important lives and events in order for the culture to survive; not merely to survive - but to remain intact. We can survive, but will we recognize the end result in a few generations?

Will the image displayed above pertaining to the war my father and his brothers fought have the same emotional impact on my great grandchildren as it does for me? That question is why memorials are created, to preserve the values held dear by one generation and to pass them on to the next.

One of the earliest surviving memorials is the Passover, as detailed in the Book of Exodus. The observation of Passover celebrates the deliverance of Israel from the tyranny of an Egyptian Pharaoh approximately thirty-five hundred years ago. The Hebrew Feasts and holidays, in effect their memorials, are what helped keep the identity of the Jews alive despite two thousand years of persecution, murder and dispersion.

Our Memorial Day started as Decoration Day on May 30, 1868, to honor the dead from the Civil War. There have been many wars since. In all, since 1775 over 1,316,000 men and women have sacrificed their lives for our country.

It is said that men do not necessarily die in combat for their Cause or their Country; but they will die for their friends.

"Greater love has no one than this, that one lay down his life for His friends".

The discussion is long over due.

Excellent post. May God bless You as we remember THEM.

Thank you all.
Before we left for church this morning I emailed my daughter who is in Afghanistan stationed in a FOB outside of Kandahar. They are aware of the tremendous support they enjoy back home. Once they return they too will become part of the remembrance. We remember the heroes who gave their life and limb. They remember their mates. A different sort of remembrance in intensity and experience perhaps, but a loving, faithful recollection that should never end.

Very good. Unfortunately too many Americans think no further than the barbecue and beer cooler on Memorial Day.

But perhaps things will change, the returning vets from our present conflicts will have a greater appreciation of our the meaning of words like "sacrifice", "patriotism", "honor", etc. All the words that have fallen into disrepute with many of our fellow contrymen.

Maybe an unintended consequence of these times will be a rebirth of those values.

FWIW, I'll remember your daughter & her comrades in my prayers tonight.

Subvet - FWIW? It's worth everything. Prayers are precious and I thank you all.

Also, as Ronald Reagan said, "Freedom is not passed down from one generation to the next through the blood stream. Freedom must be fought for and defended by each generation, otherwise you will be setting on your front porch in your old age, telling your children and your grand children what it was like to live in America, when men were free."

Knowledge is not passed down either. In this way, animals actually have a leg up on humans. Humans are born dumb as rocks and couldn't possibly survive on their own.

Kid - if only we had another Ronald Reagan waiting in the wings.

But then again, perhaps we do...

beautifully done- and thank you for the statistic list---
Carol-CS

Beautifully said, Sig. Very moving. Sad to say that in England we've seen an increase in vandalism to our war memorials in the past few years, not to mention abuse of our AF from certain quarters. When ordinary people are present they don't get away with it but govt & courts don't seem to be in synch with the people.

CS - The stats are sobering. Soldiering is a dangerous occupation. Even in peacetime, over 1,000 soldiers a year are killed just in training and accidents.

GV - It's truly our own fault. The quality of parenting and our schools has gone to hell. That's where the kids are taught values and culture. If no one teaches them about honor, why are we surprised when they act dishonorably?

I have never seen better than this site.