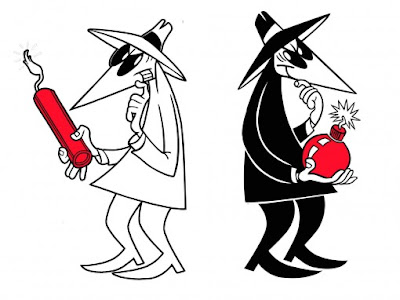 In my wasted youth I loved Mad Magazine. One of my favorite cartoons were the Spy vs. Spy series. Although the way these two characters plotted against each other is funny in a comic strip, it definitely is not humorous in practice.

It is imperative that our intelligence operatives do not pick sides. They're all supposed to be on our side.

The U.S. intelligence community is in the midst of a severe crisis. It has been used, or perhaps allowed itself to be used, as a tool of political destruction, against some of the same U.S. citizens it was created to protect.

What I am talking about is the continuing “Wiretapgate” debacle. We are seeing the widespread abuse of intelligence by an incumbent administration to target political opposition. Long a technique in the developing world — a tactic I often witnessed as a CIA station chief working abroad — the Third World has come to roost in the United States. It is a tragedy of the first order.

The danger of politicization is widely accepted throughout the intelligence community as the greatest hazard, in theory, to the intelligence profession. If an intel service cannot be accepted as an unbiased arbiter, it loses the trust of its people, and risks becoming irrelevant and unheeded. History is littered with intel failures; one need only look to the invasion of Iraq to see how politicization can lead to costly failure and a “trust gap” that can take years to bridge and resolve.

I didn't trust the Obama regime or it's creatures.

Whether or not the Trump Administration will drain the swamp is yet to be seen. 8 years of Obama did a huge amount of damage.

We have a mail guy at work who looks just like one of the spy vs spy guys. old, skinny and always sunglasses. heh.

Well, this swamp I think is way too big to kill in 8 years, especially when many of the swamp shooters are part of the swamp, but I'll appreciate any indictments, firings and agency or department closings I can get. I'll especially appreciate a 7 to 2 or 6.5 to 2.5 Conservative Supreme Court.

I think LL and Kid pretty much have it.

As to intel going astray? That's a choice. We, in part, make it. Then it cycles through. One might think making intel like upper judiciary... a lifetime appointment... might help. But that is just as dangerous. I don't think there is an easy way out. Damned if you do, and don't. That's, sort of, just life.

LL - like any other activity that you wish to curtail, people need to get spanked. I'd make the penalties for misconduct so onerous that one's life could be in jeopardy for violating intelligence guidelines.

Kid - we could certainly do worse. Accountability is a big part of any agency's rules and regulations that reflect it's commitment to mission. If that isn't there, then there is no control. And that's what has happened to most federal agencies IMHO.

Doom - the more I see what appointees have done to this country the less I like it, particularly w/r/t regulatory agencies. We need to pull back on the kinds of activities these agencies perform and remove a lot of their fangs.