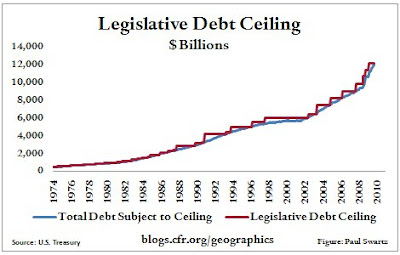 It looks like someone finally grew a pair... or found them or borrowed them. I don't care one way or the other. They finally acted like adults and said no. From the Hill:

The vote was 318-97, with 82 Democrats joining every Republican in rejecting legislation that would have authorized $2.4 trillion in additional borrowing by the federal government. Seven Democrats voted present on the legislation.

I hope they don't go with the silly and completely ignorable "dollar for dollar cut for raise" charade being posited as the next step. While that would be fine coupled with other things, it would be as toothless as Clinton's chastity by itself. They need to include a constitutional cap. I think you are being far too generous, far too soon. Maybe I am just too grumpy and distrustful.

Doom - I admit, I was delirious. Now I'm afraid to go to bed tonight.

As far as I know, I think they have til August. They will all cave.

This is lip service, misdirection and posturing. I triple guarantee it.

You, afraid? Well, okay. Me too, if not really. I like chaos in spite of my change of heart to seek wisdom. So, when it comes while I advise against it... it's like a free lunch. Wait! There is no such thing as a free lunch! Now I'm scared.

Ah, good to see I am not the only cheery guy in the crowd.

Step 1 is understanding the problem.
We're not at step 1 yet.

Not a reference of Sig94 of course.. I myself got a touch excited once when some repubblekin made adult sounding noises. :)

It's good to know that 7 Democrats are consistently COWARDS! Sounds like a Senator we once had.

It seems the only sounds we hear from politicians nowadaze is gobbling and grunting.